Costs:
Free to public
Parking in Del Cerro Park is free, street parking is free, but be careful of posted street signs (see below).

Heading out the morning of this trip, I had planned to go with my friend Briana to go hiking out at Griffith Park, since during my last trip there I didn’t have enough time to go on the hiking trails.  Briana had a friend named Daniel that wanted to go along, but unfortunately by the time he was able to go, the day was already started to get late for a long trip out to Griffith Park.  So we decided to head to another trail a little closer.

Crenshaw Blvd is a major street that runs from downtown LA all the way south through Torrance and ends up on the Palos Verdes Pennisula.  As I mentioned in the video, there was a plan to extend it all the way to Palos Verdes Drive South on the other side of the hill along the coast.  It ended up causing a major landslide and the project was abandoned and has since been turned into hiking trails for locals. 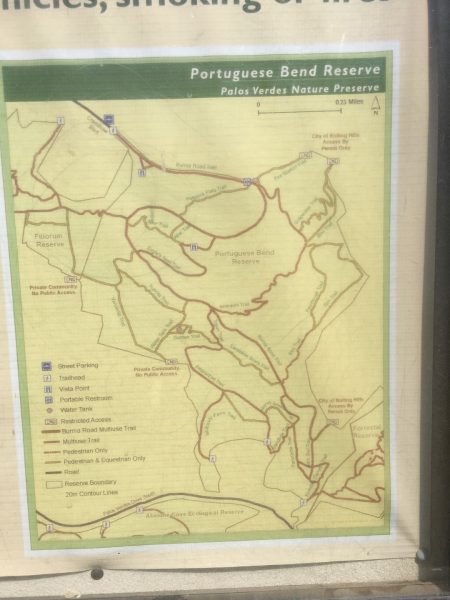 A view of the trails, the main one being the “Burma Road Trail”.
Crenshaw Blvd ends at the top, with Palos Verdes Drive South along the bottom.

One of the things you will want to be careful of is where you park when you got to visit.  If you can find parking in the small “Del Cerro Park” nearby that’s great, otherwise be careful parking along the street, as we unfortunately found out the hard way later on as they gave a lot of cars parking tickets because of this sign: (and the local residents are very likely to call to and report cars there, so just be careful) 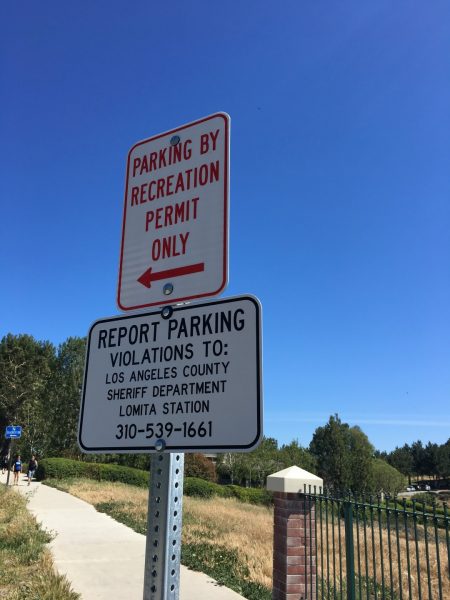 The hike is essentially entirely downhill, so if you’re not a regular hiker or in good shape, be aware of how far you plan to go, as it will be all uphill on the way back.  We hiked about 1.5 miles along the Burma Road Trail, before turning back.  We were very impressed at some of the other people out there, as they seemed to be handling the hike with ease.  Including a family with a very young boy who had no problem keeping pace, as well as a couple bicyclists who rode uphill all the way, before zooming back down.  It was a beautiful day out, one of the biggest reasons for living in southern California.  Because of that I really enjoyed the hike because I loved seeing the view, looking out over the ocean, with Catalina Island off in the distance.

Oh and before we move on, I just wanted to share this shot of my friend Briana as she decided to have a little fun while I was videotaping and taking pictures and had me dying laughing.

After the hike, I met up with my dad as we drove to San Pedro to go visit the Battleship USS Iowa.  As San Pedro is a city I’ve grown up in and around, I spend a lot of time there, and for the past 4 years or so since they brought the battleship there to become a museum, I’ve seen it often and wanted to visit.  I’ve never actually been on a navy ship before, so I was impressed with how big it was and how much was on it, and of course the massive guns mounted on it were insane up close.  But before we get into too much of the battleship itself, one of the other cool things about San Pedro is it’s part of the Port of Los Angeles, the busiest port in the United States.  It’s also a major location for cruise ships departures.  It’s really a major harbor, and is impressive to see up close.

If you are curious as to just how big the USS Iowa is, here’s a interesting set of facts you can see about the ship.  Such as the fact that it’s longer and faster than the Titanic was. 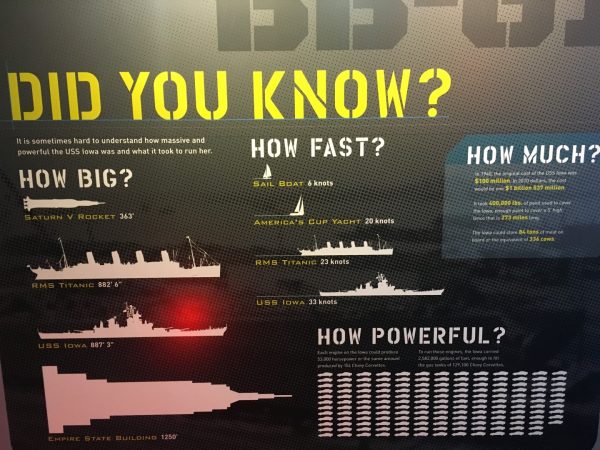 As the Battleship USS Iowa was an active battleship during WWII and other battles, there were many sailors who served and lost their lives while on the USS Iowa.  On board they have a memorial for those crewmen.  I wasn’t able to find a good place for it in the video, but I wanted to make sure to include it here.  If you go visit, be sure to take a moment of respect for the people who fought to help ensure our countries (and the world’s) safety.

In the video, I showed you the main cannons, as well as the giant shells.  But it takes a lot of gunpowder to fire those shells.  Inside the ship, they show the gunpowder canisters and the way they were moved around the ship.  Here’s a quick video showing these giant canisters:

One of the things I touched on in the video was the kitchen and bakery, I briefly showed the sample menu of what would be served on board, but here’s a better shot you can take a look at to get an idea of how eating was done on board while in service.  Personally, I really liked the sound of “Midrats” which I’m going to call all my late night snacks. 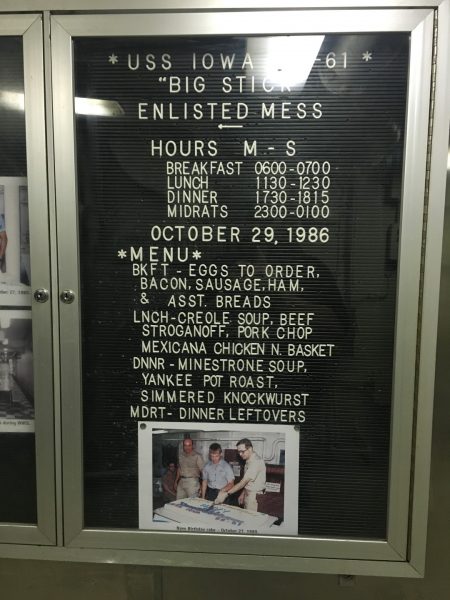 And while we’re talking about food, they also had this vintage vending machine, which I totally loved the look of much better than the modern ones. 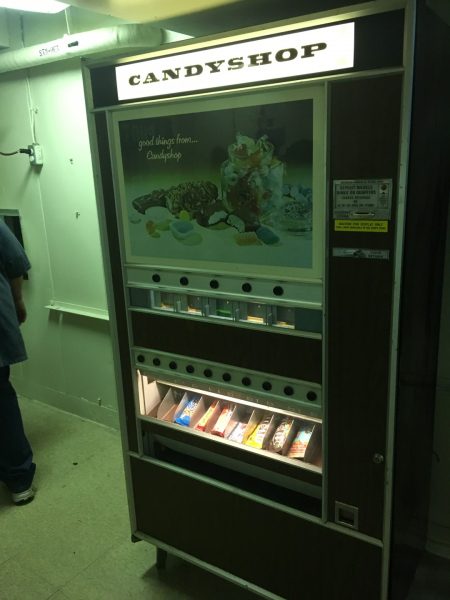 Along the tour, we came across this mural that had been partially washed away, which was a shame, because the picture of what it was seemed like it would have been pretty impressive to see. 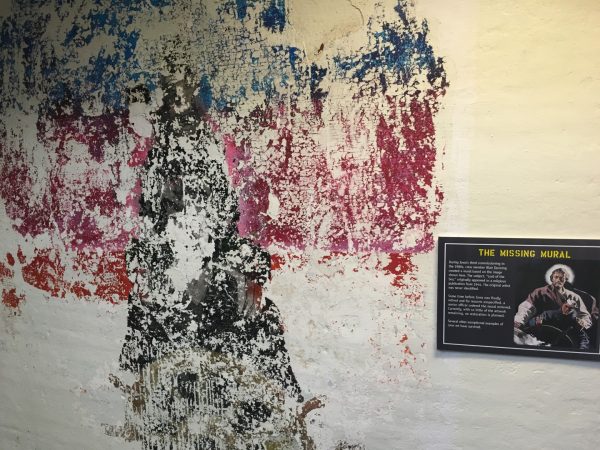 Anyways, that’s a bit more information about both of these trips for this week.  As always, if you have any questions, please comment below and I’ll be sure to respond as soon as possible.  Thanks for reading, see ya next week!