For this week’s Journey I headed to the Sante Fe Dam in Irwindale to visit the Renaissance Pleasure Faire.  I have only been to the Ren. Faire once before many years ago with a couple friends, but had not been back since.  On this day it was really overcast and the weather forecast for all the cities around the area where the faire was happening, so it looked like the day might get rained out.  I decided to chance it as the weather.com forecast said there was going to be no rain at the faire itself.  It stayed dry the whole day while I was there, but on the way driving home, I passed through some heavy rain clouds and was glad they stayed clear of the faire.

Here’s a shot I took from the Sante Fe Dam – You can see the clouds all around the area, but somewhat clear overhead here

Coming in to the Dam, there was a parking fee of $10 to get in.  I’m not sure if this is the case every day or not, but if you decide to go there to visit the excellent park areas or run along the outer wall, make sure to bring some cash just in case.  As you circle, there are several “stops” along the way with different park areas, each one looked a bit different, but I only got out at the one spot (in the picture above & seen in the video).  The park areas were very clean and well kept, with playground equipment and plenty of tables setup for a party or gathering.

Anyways, getting to the faire, you can buy tickets at the front gate, but you will pay a bit more than if you get it online in advance or at a participating partner like Walgreen’s.  Unfortunately I did not bother to do either of these things, so I was prepared to pay a little more.  But at the window the guy working there asked if I had a AAA card, because I was able to get a discount with that too.

Once inside, as I mentioned in the video, there are a lot of booths selling all kinds of different things that fit into this Renaissance time period.  In fact, most of the faire can be broken down into 4 different types of booths.  Goods for sale, Activity/Midway, Food, and Stages.  Here’s a map of this year’s faire: 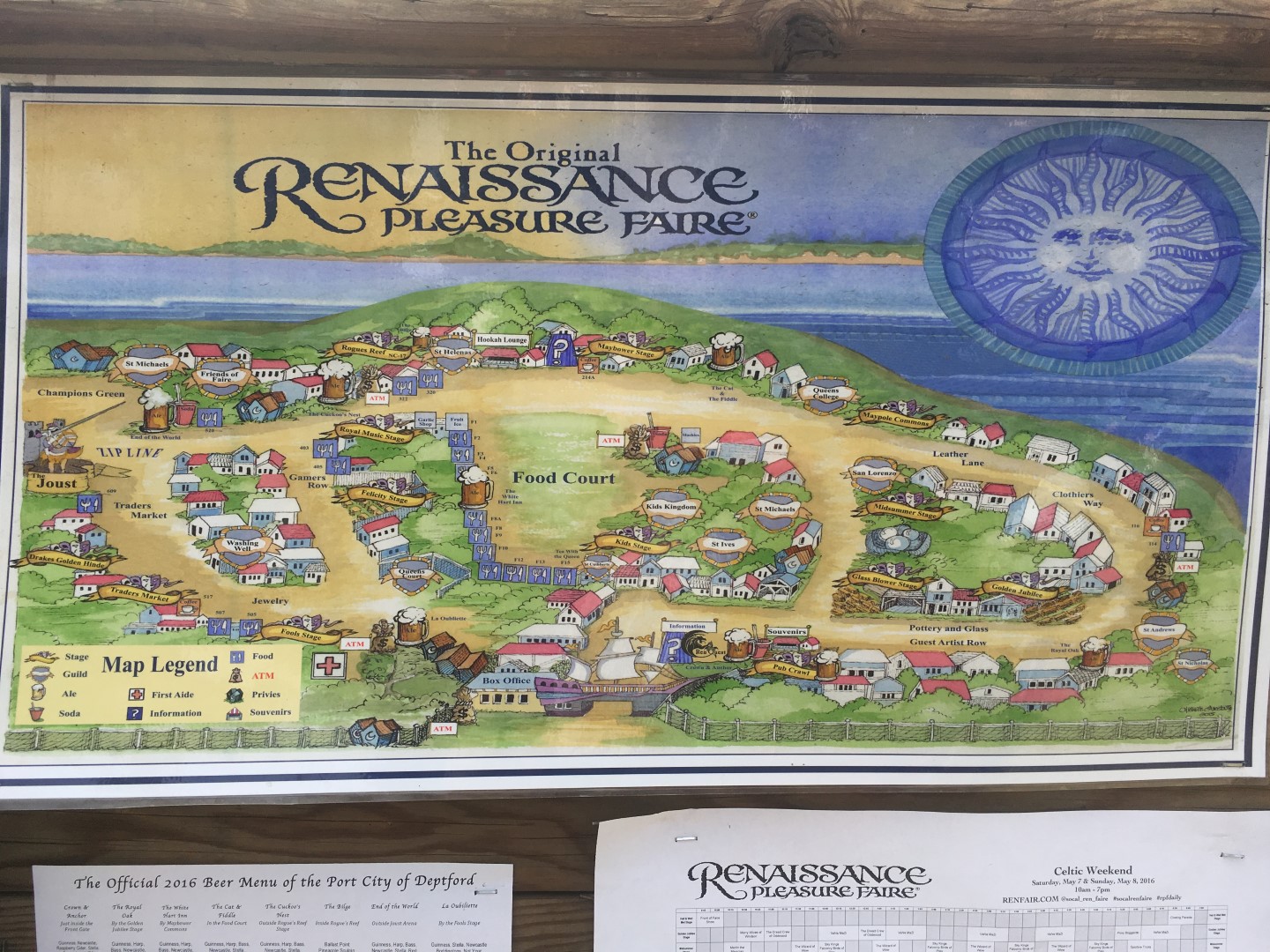 As you can see, there are lots of each kind of booth.  One this I did not do beforehand (yeah, I went in pretty blind), is to check the show and event schedule prior to arriving (you can see it also posted in the picture above in the bottom right).  Nor did I pick up the program that was available which would also have the events.  There are shows being performed throughout the day, so definitely plan out your route to try and catch all the ones you wanna see.  Also try and get there as early as possible, as some of the shows do start early.

The joust that I went to was “The Queen’s Joust” (there were a couple jousts at different times of the day).  If you forget when it is, you should be able to see the giant parade with the Queen and the noblemen & women following her as they lead the way to the arena (in the top left of the map).  That was a fun event, with plenty of seating so don’t worry if you don’t get there early.  It’s not a long show, the one I attended only lasted about 30 minutes.  One of the really cool things I liked was that the faire did a good job to try and provide sign language interpreters for the hearing impaired. 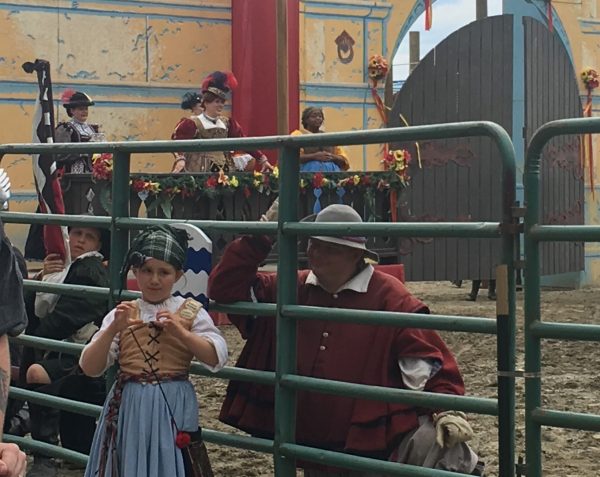 Probably the cutest interpreter of the day, her mom was just down to the right also interpreting.

I really enjoyed the other stage shows (which I talked about in the video), but my favorite was trying out the different activities like the archery, knife throwing, and other weapon spots.  Generally it costs about $5 for each go at one of the booths, which gives you several tries.  This is definitely one of those things you don’t get a chance to do in your normal life, and especially able to do safely.

My only complaint I’d say is the price of the food and drinks there.  Now, I would expect to see charges a little higher than normal for food or drinks, but some of the prices were just outrageous.  The turkey leg for example, was $11 by itself, with no sides or drinks.  The price for some french fries was like $9.  Now, don’t get me wrong, the food is DELICIOUS, but man, you will pay for it.  And if you want some of the alcoholic drinks, that’s really not fun, as I saw others getting two drinks and it cost them $20 (not counting any tip).

If you can, it’s fun to dress up and go in character.  All the people working booths there were dressed appropriately, but the cosplay by the attendees was sometimes just as good if not better.  A lot of attention is shown to the Comic Conventions where people dress up as superheroes and pop culture characters or whatnot, but the people who attend here put just as much time and money into their costumes.  What I really appreciated too was that much of the really nice leather and outfits were handmade, which I’m sure took at lot of work and wasn’t cheap.  There was a amazing mask for sale that I would’ve liked to get, but it was $229!  But anyways, I’ll end this post with one of my favorite costumes.  If you have any questions, leave a comment and I’ll answer any I can.  Thanks for reading!